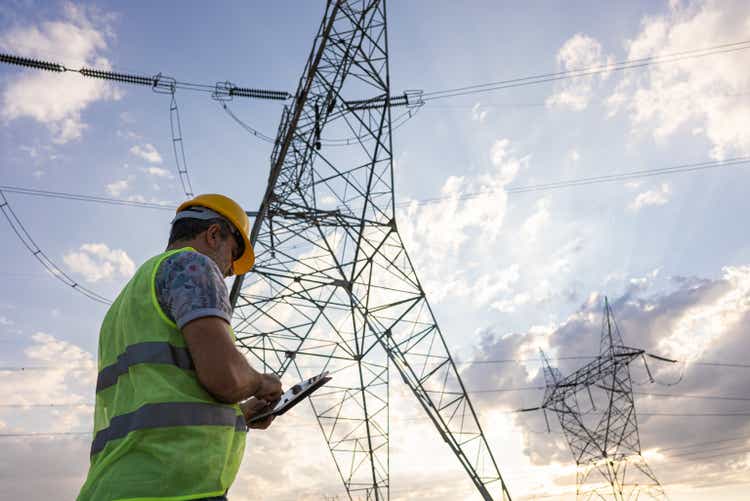 Recently, I reviewed the utility-focused Reaves Utility Income Fund (UTG) with the conclusion that UTG may underperform other utility funds due to its floating rate leverage exposure.

In this article, I will review another fund focused on the utilities sector, the DNP Select Income Fund (NYSE: DNP) and compare it to UTG. Finally, I will provide some general thoughts on the utility industry in general.

It’s understandable that so many CEF investors swear by DNP, as it has consistently paid out its $0.78/share distribution for over 2 decades. Management has also navigated the current challenging environment well by investing in outperforming midstream energy companies. However, with P/E multiples for the utilities sector at record highs, future returns that can support distribution may be more challenging. Higher interest rates can also harm the net asset value due to the contraction of the P/E. I would suggest investors stay on the sidelines for now until Utilities sector P/E multiples return to more reasonable levels.

DNP Select Income Fund is one of the largest and oldest closed-end funds (“CEFs”) in existence, with a market capitalization of $3.9 billion. It first offered shares to investors in 1987 and has paid a continuous distribution to unitholders for 35 years. DNP’s primary goals are current income and long-term income growth.

As one of the most popular CEFs in the market, DNP trades at a significant premium to its net asset value. Currently, this premium is 16.8% (Figure 1).

DNP’s strategy is to invest primarily in a portfolio of equity and fixed income securities of companies in the utilities sector, taking advantage of the income and growth characteristics of utilities over the long term. Under normal circumstances, at least 65% of the fund’s assets will be invested in utility companies engaged in the generation, transmission or distribution of electric power, gas or telephone services.

DNP also uses leverage to enhance returns. As of the April 2022 semi-annual report, the fund had leverage of $1.1 billion (debt and preferred stock) on total assets of $4.45 billion for a leverage of approximately 25 % (figure 1). DNP’s leverage is partly variable rate and partly fixed rate.

Portfolio holdings as presented on the fund’s webpage are a bit dated, consistent with the April semi-annual report. Seeking Alpha appears to have more up-to-date details on portfolio holdings, as of July 31 (Figure 3). In any case, we see that DNP invests mainly in utilities and telecoms, with respectively 77% and 9% weighting.

The fund also has a 19% weighting in energy, which, if we look through the semi-annual report, comes mainly from midstream energy companies like Cheniere Energy (LNG) and Enbridge (ENB).

The goal of an income fund like DNP is to achieve consistent returns that can fund its distribution and hopefully increase the distribution over time. In terms of regular returns, DNP has certainly achieved this in the past, with a 10-year annualized net asset value return of 10.7% (Figure 4).

Compared to its peers, DNP also compares well, being in the top two quartiles 7 of the last 10 years (Figure 5). The YTD yield of 4.5% is also a pleasant surprise. Given rising interest rates, one would have expected a floating rate leveraged fund like DNP to lag behind.

I believe the strong year-to-date performance is driven by DNP’s portfolio weighting of around 20% in outperforming midstream energy companies. For reference, the Global X MLP ETF (MLPA) has returned 19% year-to-date.

Kudos to the fund managers for finding ways to outperform in a difficult year!

This shift in distribution distribution is to be expected, as interest rates have been kept low for many years, so high-yielding assets such as utilities have seen their prices rise accordingly. NII% will naturally be lower and the fund will harvest higher priced stocks to finance its distribution.

Management fees for DNP are above average, but reasonable. The fund adviser, Duff & Phelps Investment Management Co., receives a quarterly fee at an annual rate of 0.60% of “average weekly assets under management” (total assets less accrued liabilities) up to $1.5 billion dollars and 0.50% above. Total expense, excluding interest expense, as a % of average net assets available for common stock was 0.98% for the first half of fiscal 2022 and 1.00% for fiscal 2021 Including interest, the figures were 1.70% and 1.77% respectively.

For context, the Utilities Select Sector SPDR ETF (XLU) has an expense ratio of 0.10%.

As mentioned above, in a low interest rate environment, long-lived assets such as utilities have been overpriced, leading to lower investment income and higher prices. My main concern is that the prices of these long-lived assets have reached extreme levels in recent years. From Figure 7, we can see that the P/E multiples for the utilities sector are currently at all-time highs, so future returns for the sector, and the DNP fund by association, will most likely have to rely on on earnings growth.

However, looking at earnings growth for the utilities sector, we note that with the exception of 2021, earnings growth has been below 6% (Figure 8). Consensus earnings growth for 2022 and 2023 is also just 5-6%. Going forward, it may be more difficult for DNP to generate sufficient returns (either through NII or price appreciation) to cover the 8% of the NAV distribution, if the P/E multiples cannot increase further from already extreme levels. We could see an increasing use of ROC and a gradual decline in NAV as a result.

Additionally, there is an additional risk that as the Fed raises interest rates, the P/E multiples will contract materially, which will hurt the NAV. On the positive side, higher interest rates and lower P/E multiples should help NII when funds are reinvested.

Comparing DNP to the Reaves Utility Income Fund, also popular with CEF investors, we find that since inception, UTG has generated higher annual returns than DNP, at 9.8% versus 8.1% (Figure 9). However, UTG presents more risk, as it has higher volatility (19.0% Stdev vs. DNP at 16.1%), and a maximum drawdown of 56.7% vs. 41.8%. UTG also has a higher correlation with the market. This difference can probably be explained by DNP’s moderate holding of fixed income securities, ie 15% of assets.

Another important point to highlight is that year-to-date, DNP has generated returns of 9.5%, while UTG is down 5.6% (Figure 10). The main difference between the two funds is that DNP has a large allocation to midstream energy companies which have outperformed this year, while UTG has bet on media and REITs, which have underperformed utilities.

Between UTG and DNP, my long-term preference is UTG because it has a higher historical compound return and increased distribution. The caveat is that in the short term, UTG is not properly positioned for the current market volatility with its floating rate leverage and long media and REIT bets.

In summary, it’s understandable why many CEF investors swear by DNP, as it has historically paid out a moderately high distribution of $0.78 per year for a current yield of 7%. Management has navigated the current challenging environment well by investing in midstream energy companies that have benefited from energy-fueled inflation. However, there are risks to the net asset value of DNP related to return of capital as it may become increasingly difficult for DNP to earn sufficient returns to maintain its distribution when P/E multiples are already at extremes. Higher interest rates can also harm the net asset value due to the contraction of the P/E. Similar to my recommendation on UTG, I would suggest investors stay on the sidelines for now until Utilities sector P/E multiples return to more reasonable levels that will make NII yields more attractive. and gains made easier to achieve.